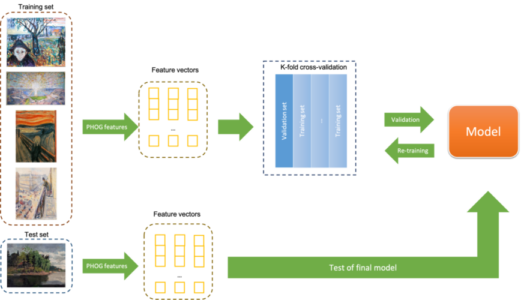 Photo: Schematic of the machine learning classification method. Paintings are (from the top): “Jealousy in the Garden”, “the Sun”, “Scream”, “Rue Lafayette”, all by Munch.

Munch – the Norwegian painter is probably most famous for his painting called “The Scream” but as a talented artist who painted for 60 years, his heritage is immense. At the late part of 19th century and the first part of the 20th, Munch lived in a period where new ideas, new artists’ media and new ways of expression were put through to the forefront of the artistic world and the general public. You can see that this is affecting Munch’s artwork, as throughout his career his paintings change expression as he develops his own style. CHANGE fellows ESR 7 Yoko Arteaga, ESR 1 Agnese Babini and ESR 10 Jan Cutajar are currently trying to see if they can track the development of Munch’s own style through his career using imaging-based and AI-based methods.

Based on publications of art historians such as Gerd Woll who specialise in Munch’s artworks and using information available on the Munch website, the fellows roughly separated his many artworks into four categories, each category representing different periods of his career. The first category contains artwork from the early period of Munch’s career, when he followed the established, more traditional practices, whilst the second category shows the development of Munch’s own style and establishment as an artist with e.g. his artwork collection called “the Frieze of Life” that “The Scream” is part of. The third category contains his monumental public artworks that you can find in the Aula of the University of Oslo and at the Freia Chocolate Factory, and the last category is the artworks from the later period of his career. Jan Cutajar wants to emphasise that this is a loose categorisation based on Munch’s lifetime as an artist and it must be kept in mind that he reworked the same motifs many times during his career and tracking those changes could be another way to look at his works. They have also been thinking of a third way to group paintings, by theme, as in the Munch Museum’s public database. The bottom line is that the CHANGE fellows’ work does not feature a definitive grouping of his paintings, but with using machine learning methods they will try to classify Munch paintings from a different period into one of the periods they have already defined. If their method works well, they can apply them to other kinds of categorisations and identify artists with machine learning methods.